Discover the synergy of curcumin and milk thistle

Milk thistle has been used for more than 2,000 years. This plant is native to the Mediterranean area and belongs to the family of plants Asteraceae, which also includes other plants like sunflowers and daisies. The Greek physician and botanist Dioscorides was the first to describe milk thistle's healing properties in 40 d.C. Milk thistle owes its name to the milky white liquid coming out of the plant leaves when they are crushed. The real plant leaves also have a white stained pattern that looks like if they were soaked in milk.

It has antioxidant and anti-inflammatory properties and it is commonly used to detoxify the body, especially the liver, and as an adjuvant agent in liver diseases and gallbladder problems. Milk thistle (Silybum marianum) can be grown in many parts of the world with warm weather. In fact, milk thistle or silymarin is the most common natural supplement for liver disorders in countries like the USA due to its many benefits for health. It is considered to be a hepatoprotective, galactogen, demulcent and cholagogue agent and it is thought to have a healthy digestive effect as it promotes the formation of enzymes, increases bile production, reduces inflammation and soothes mucous membranes in the body.

Turmeric (Curcuma longa), the main spice in the Indian dish curry, is argued by many to be the most powerful herb on the planet at fighting and potentially reversing disease. Turmeric benefits are incredibly vast and very thoroughly researched. Currently, there are over 12,500 peer-reviewed articles published proving turmeric benefits, especially one of its renowned healing compounds, curcumin. Curcumin is the active ingredient in turmeric responsible for so many of its benefits. This puts turmeric on top of the list as one of the most frequently mentioned medicinal herbs in all of science. It has a long history of use, particularly in Ayurvedic medicine.

Turmeric, a spice that has long been recognized for its medicinal properties, has received interest from both the medical/scientific world and from culinary enthusiasts, as it is the major source of the polyphenol curcumin. It aids in the management of oxidative and inflammatory conditions, metabolic syndrome, arthritis, anxiety, and hyperlipidemia. It may also help in the management of exercise-induced inflammation and muscle soreness, thus enhancing recovery and performance in active people. In addition, a relatively low dose of the complex can provide health benefits for people that do not have diagnosed health conditions.

Most of these benefits can be attributed to its antioxidant and anti-inflammatory effects. Ingesting curcumin by itself does not lead to the associated health benefits due to its poor bioavailability, which appears to be primarily due to poor absorption, rapid metabolism, and rapid elimination. There are several components that can increase bioavailability. For example, piperine is the major active component of black pepper and, when combined in a complex with curcumin, has been shown to increase bioavailability by 2000%. Curcumin combined with enhancing agents provides multiple health benefits.

Innovative synergy to enhance well-being, protect and repair the body.

Turmeric is essential to maintain a good health, but in normal conditions it has a very low level of assimilation. So, a high dose of turmeric has to be taken so that it has effect.

- CAVACURMIN® is a form of ENCAPSULATED CURCUMIN that makes curcuminoids much more bioavailable in the body. Curcumin encapsulated with plant oligosaccharides is effectively released into the intestinal epithelium, guaranteeing an absorption that is multiplied by 40; namely, a small dose provides great benefits.

CARDUSCAPS® is an ideal supplement with a synergistic effect [CAVACURMIN® + MILK THISTLE] for cleansing the body in depth and enhance well-being.

It contains plants which are beneficial for metabolism disorders, eyes, joints, bones and cartilages, as well as for hepatobiliary disorders.

It also helps protect the genitourinary, pulmonary, stomach and intestinal systems and it is an ideal supplement to fight oxidation and for intense physical exertion.

FEEL THE POWER OF THE SYNERGY OF MILK THISTLE & CURCUMIN & PIPERINE

Innovative synergy to enhance well-being, protect and repair the body.

Turmeric is essential to maintain a good health, but in normal conditions it has a very low level of assimilation. So, a high dose of turmeric has to be taken so that it has effect. 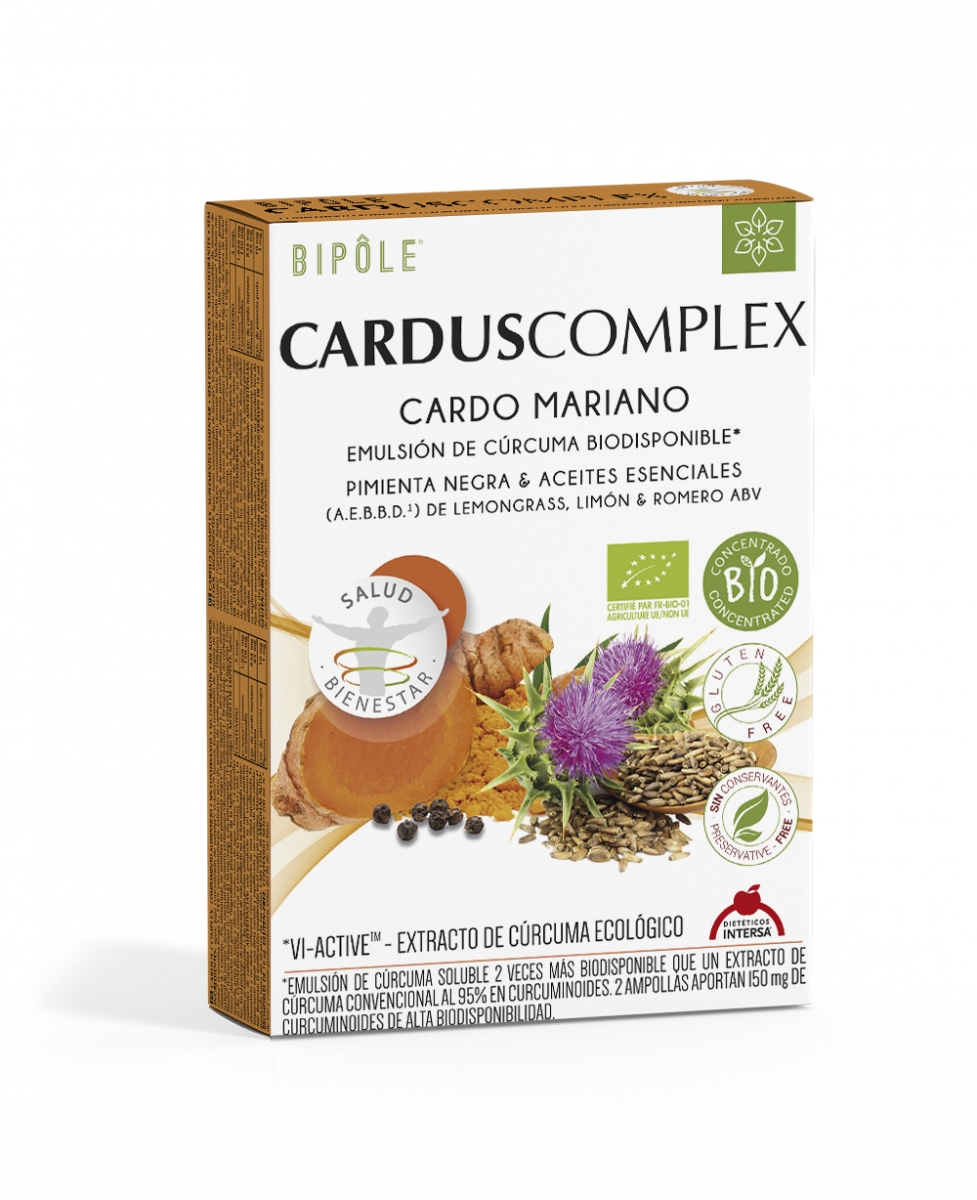 - BLACK PEPPER EXTRACT, 95% PIPERINE (it increases the absorption of curcuminoids and it is essential for prolonging the average life of CURCUMIN in blood plasma).

It contains plants which are beneficial for metabolism disorders, eyes, joints, bones and cartilages, as well as for hepatobiliary disorders.